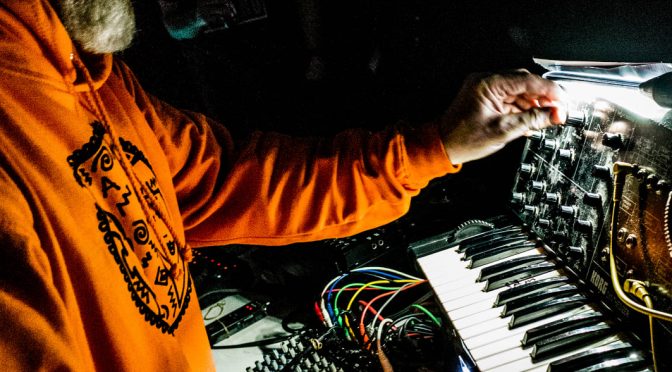 A real slice of UK ambient-house history surfaces for the first time.

Yet another nugget on Musique Pour La Danse, ‘Live at The Brain 1990’ pays witness to two of the UK’s leading acid house pioneers steering the sound into new horizons to a crowd of some 50 heads at a gallery-cum-club-cum-bar owned by Sean McLusky and Mark Wigan. The hour long flow of glistening pulses and polychromatic melody is testament to the energy and innovative tekkerz of its makers as much as the UK zeitgeist in 1990, pairing sampled and sequenced beats with live instrumental overdubs and FX in a fresh and driving style that was spawned for the rave and would would go on to inform so much electronic music in its wake.

As the shaman of ambient music, DJ/producer/critic/writer Mixmaster Morris surely needs little introduction, while his accomplice Paul Chivers aka Ramjac Corporation is legendary for his early releases with Irdial and for playing at many key events from the Summer of Love in 1988 and beyond (Sunrise, Energy and Back To The Future), plus touring with Orbital, The Shaman and Morris’ Irresistible Force. Both were regulars at The Brain and this LP offers historic documentation of their shared vision for electronic music, marrying rolling drum machines with computer-chopped breaks, diced samples, and in-the-moment improvisation in a way that clearly marks the point where acid house and rave’s Chicago, Detroit and NYC inspirations gave way to a flux on influence from psychedelic rock, new age, and dub, paralleling efforts of Fabio & Grooverider at Rage, but with their own, lusher flex.